Learn why our games are unique

Why we create and apply serious games

In his article “Manifesto for a Ludic Century” (2013) Eric Zimmerman calls the 20th Century the age of linear information, and the 21st Century the age of games. Because we live in a world of complex systems, we need systemic tools to describe it. Linear media (books, movies, lectures), no matter how attractive, allow its users only to learn passively (“learning-to-know”), without exposing them to direct practice (“learning-to-do”) (Aldrich 2009). Games, on the other hand, offer their users possibility to learn actively, as they act as metaphors reflecting specific systems (Mendler de Suarez et al. 2012). Consequently, a carefully designed game provides its players with a first-hand experience of the system that it represents.

How our games work

Serious gaming developed from other fields, including game theory, drama theories and systems analysis. In serious games that we create, participants affect each other and the outcome of their actions results from individual and/or collective decisions. Each member of a system is equipped with only partial knowledge and limited access to resources required for a solution. Also their views on the issue differ. The expected result of a serious game is thus to improve understanding of a complex issue. The success depends on how players deal with the rules, how they interact and how they use their power and resources (Duke, 1974).

Our serious games employ procedural rhetoric – “the practice of using processes persuasively” (Bogost, 2007). A set of processes is applied by a game designer in order to “construct” game’s reality. These processes are later experienced by players during a gameplay and help them grasp the mechanisms ruling the real world. Consequently if a game designer desires to e.g. communicate the need for better cooperation between different actors involved in flood risk management, her game should allow players to discover that their success depends on effective collaboration. Procedural rhetoric makes the message more transparent and more easily adopted by the target audience (Walsh, Magnuszewski, Slodka-Turner, 2012). 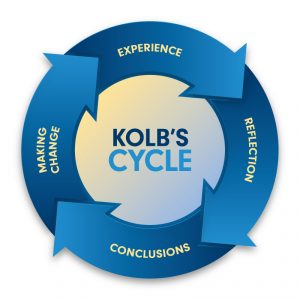 While serious games can sometimes act as standalone learning tools, most often they are accompanied by a debriefing session after the game. During such session players analyze their moves, share their thoughts and emotions with others and reflect on the whole experience (Crookall 2010). Proper debriefing session allows participants to go through any stressful aspects of the whole experience and transform it into positive one. Moreover, the review of the simulation results gives the moderator an opportunity to compare these results with real-life conditions and data.

Workshops with games can be built around David Kolb’s (1984) experiential learning model. This four-stage cycle consists of the following phases: concrete experience, reflective observation, abstract conceptualization and active experimentation. Gaming workshop following Kolb’s cycle starts with an experience – a game; then during the first part of debriefing, players reflect upon their moves; conclusions from that part should be then used to make theories about the real-life problem; and then players should be encouraged to put these theories into action in their daily activities (Daszynska-Zygadlo, Pajak 2016).

Use our games in your activities

We offer a wide array of different games in different topics: from board game on the role of diversity in resilience building to online multiplayer exploring social aspects of climate change and fossil fuels exploitation. Most of our games are free for non-commercial use, and many of them you can download and print by yourself.

Find a game or social simulation that suits your needs – or let us create it for you!

Copyright © 2018 by the Centre for Systems Solutions - CRS | All Rights Reserved
This site uses cookies: Find out more.